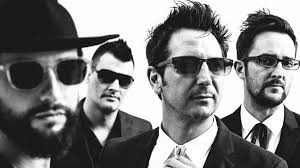 The Roadhouse 2021 Blues Rock Album of the Year is by a British group from Surrey, England…. J. Lee and the Hoodoo Skulls. The recording, Beggars Soul, is a vibrant energetic collection of tunes that are brash and edgy. Drawing from the same musical well as Chuck Berry, Larkin Poe, the Black Keys and the Record Company, this 4 piece band cranks out songs that will get ya pumped and wanting to gather once again with friends at a rowdy roadhouse or pub for some good times.

The band is composed of J. Lee (vocals), Harun Kotch (Lead Guitar/ Writer), Wayne Riches (Drums) and Mike Hartnett (Bass). The album was recorded at an old church chapel which gives the songs a cool texture that just enhances the aura of the music. Just give the title cut, Beggars Soul, a listen……you will hear what I mean.

I also just love tunes that capture the magic of the era when Muddy Water’s famously said that the blues had a baby and it was called rock & roll. The song Baby Can’t Sing the Blues is an absolute time capsule of a roadhouse blues tune that perfectly illustrates Muddy’s statement.

Every recording on this album is worth a listen, particularly if you are feeling dreary or depressed and need a musical “pick me up”. So…..go to your favorite music download site….get your own copy of Beggars Soul as your endorsement of the very best badass Roadhouse blues rock of 2021!