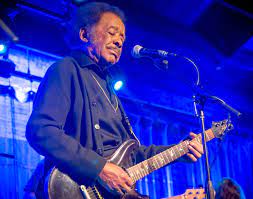 We lost another Blues giant this week with the passing of Jimmy Johnson at the age of 93. Born in Mississippi in 1928, Jimmy was a part of the “great trek north” that brought so many blues men and women to Chicago in the 1940’s and 50’s. Jimmy arrived in the windy city in 1950 and over the next 30 years paid his dues singing, playing the guitar and piano, and touring and performing with the likes of Otis Rush, Albert King, Magic Sam, and Freddie King. He was known for a fluid and understated style on the guitar and his high tenor soulful voice was riveting.

Jimmy broke out on the national blues scene in 1979 when, at the age of 50, he released his first big recording, Johnson’s Whacks, on Delmark Records. Over the ensuing years, he took the blues world by storm becoming a fan favorite in Europe. In 1983, he released an album on Alligator Records, Bar Room Preacher, that is part of my personal album collection and one of the great all time blues recordings.

In 2019, at the age of 91, Jimmy released the recording Every Day of Your Life on Delmark Records that won him the Living Blues award as artist of the Year for 2020. It was not a lifetime achievement award, as many are for albums released late in life by well known artists. The recording is a soaring celebration of the blues that he played and the fact that he laid down the tracks at 91 just adds to the special blues aura that marked his life. In particular, the instrumental, Better When It’s Wet, is simply amazing. And the title cut, Every Day of Your Life, is representative of his soulful blues style and apropo as a fitting final statement from one of the greatest of them all! Take the time to give the album a listen….it will remind you of why you love the blues!

Ben Vee started out spinning songs on terrestrial radio and at nightclubs back in the 1970’s in his home state of Louisiana. After a career in the construction business, he returned to DJing in 2011. He now hosts two shows each week on http://www.bluesmusicfan.com and writes about the blues at http://www.benveeblues.com from his home in Connecticut. He also has a personal 24 hour stream devoted to the Roadhouse Blues… WRHB