On The MARK….The Nighthawks new recording is fantastic Roadhouse Blues 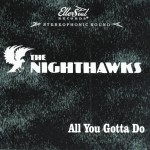 I’ve been a fan of the Washington DC based Nighthawks for a long time and they simply have out done themselves on their new CD, All You Gotta Do.  I count a gospel blues nomination, a harp instrumental nomination, and a Blues Song of the Year among the tracks on this 12 track masterpiece!!  Mark Wenner has fronted and guided the band for 43 years and it shows in the both the selection and performance of some badass roadhouse blues tunes. On their previous albums they have performed primarily original songs but on this one they expand their horizons to give several great classic blues tunes the Nighthawk touch including songs by Muddy Waters, Sonny Boy Williamson, and RL Burnside.

The highlight of the album has to be a slow beautiful soul blues ballad Three Times Your Fool.  Mark Stutso, who wrote the song, puts his heart and soul into the performance and it should earn the band a sure fired nomination for song of the year.  And if there is a nomination for “Just Plain Bad Ass Rockin Blues” it has to be their reworking of RL Burnside’s Snake Drive. This trance blues tune has a infectious beat with great harmonica and guitar work.  They also kick out a jammin version of Sonny Boy Williamson’s Ninety Nine Dollars and a great version of Muddy Waters Baby I Want to Be Loved.

The Nighthawks also add some down the bayou spice to the recording with Voodoo Doll and Isn’t That So and take a side trip back to the sounds of the  fifties and sixties with a great reworked version of the original Standell’s song Dirty Water and Brenda Lee’s That’s All You Gotta Do.

And if that is not enough, Blues For Brother John, is a simple but great blues harmonica instrumental that deserves a nod for Mark Wenner in the harmonica category.  And to top it off Mark Stutso does a heart warming version of Levon Helm’s When I Go Away that is gospel blues at its finest.

The current lineup for the Nighthawks is Mark Wenner (vocals and harmonica), Mark Stutso (vocals and drums), Johnny Castle (vocals and bass) and Paul Bell (guitars).  The chemistry of the group is undeniable and the fact they are havin a damn good time comes through clearly on the recordings. Here’s to hoping they stay together for a long long time!

PS…if you feel like listenin’ to some roadhouse blues after reading this review….check out my 24 hour stream at http://www.s1.nexuscast.com:8043 .