Hook, Line, and Sinker…Popa Chubby is the CATFISH!

I got a healthy helping of blackened catfish and POPA CHUBBY last night at Black Eyed Sally’s in Hartford!  Our second outing in as many nights at the renowned club and eatery in downtown Hartford, I got  to check an item off the bucket list while feasting on great food and the tunes of one of the most talented artists of our time. 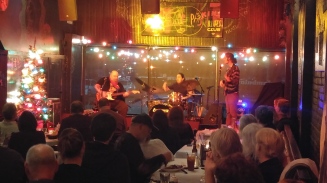 For over 25 years, Popa Chubby has cranked out an unapologetic mix of blues and soul that rocks the rafters and, occasionally, punches you in the gut. He feeds on the audience as he plays and his banter between songs with the guests is adult in nature and no holds barred….they love him for it. I had been told that you don’t know Popa Chubby until you see him live….well I do now!  During his second set, he did a song that makes its way onto a lot of my DJ playlists, 69 Dollars.  Well, the recorded version is great but during a 20 minute rendition of it, he took the tune to a whole new level and produced beautiful tones on an electric guitar that I have NEVER heard before! It was something to watch and hear.

During three hours of music spread over two sets, the “Catfish”, as he called himself,  played tunes from his latest album, The Catfish, as well as several songs from his other albums. He also feasted on some tunes by Jimi Hendrix, Otis Redding (an impromptu request from the audience), and did a touching tribute to artists that passed on this year with a striking version of Leonard Cohen’s Hallelujah. His energy level was incredible though out..amazing given he literally just got off the plane from a two month tour of Europe..and has a packed booking schedule over the next couple of months.

My 24 music stream is entitled the Ben Vee Roadhouse blues.  After seeing Popa Chubby, I now know who truly rules the roadhouse…..long live the CATFISH!